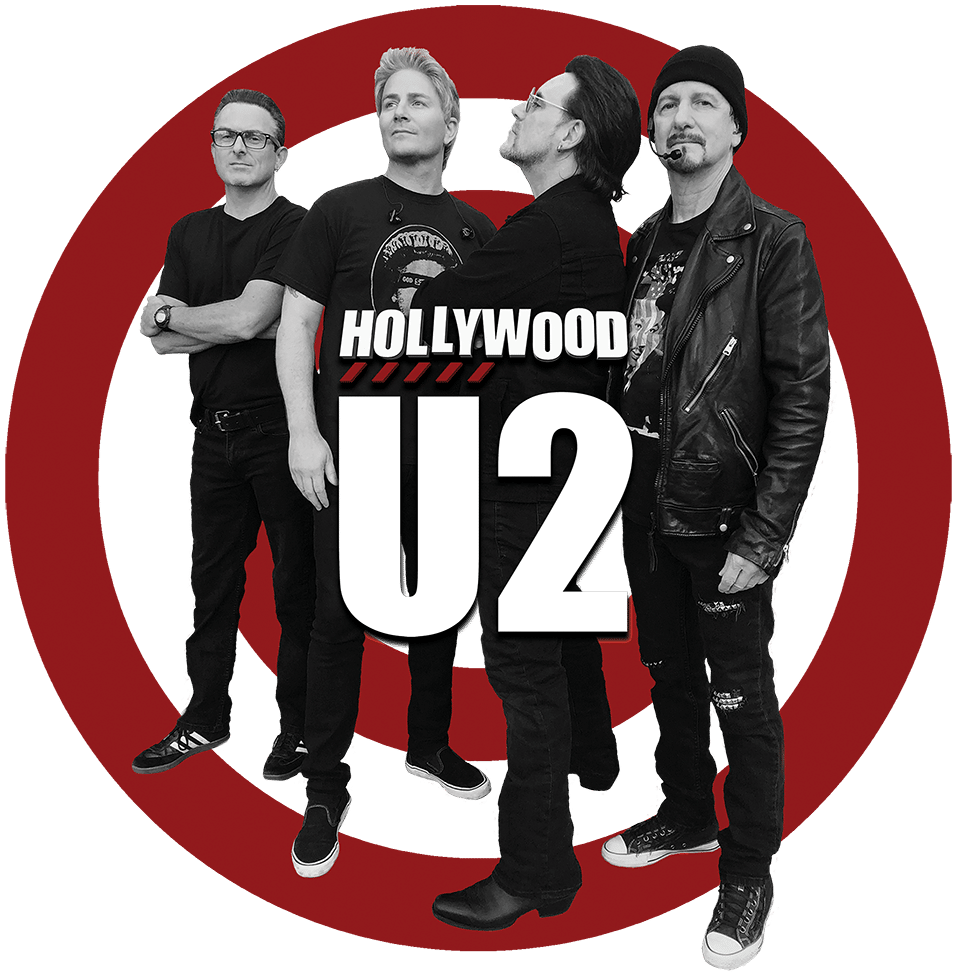 Based in Los Angeles, Hollywood U2 was founded by lead singer Joe Hier (aka Hollywood Bono who is originally from Boston) in 2003. The band has toured the world performing to sold out crowds in such countries as United States, Singapore, Costa Rica, Dominican Republic, France, Mexico, to name a few and they recently performed for the US Marines in Japan. Their vast experience has taken them around the world, captivating crowds of 10,000 plus.

In 2016 Hollywood U2 received the Hollywood FAME Producers Choice Award for Outstanding U2 Tribute and were nominated as “Best Tribute Band” at the LA Music Awards.

Bono invited the lead singer Joe Hier up on stage to sing “The Sweetest Thing” with him and U2 during their Innocence and Experience Tour and this performance made headlines around the world. (see below for more info).

Hollywood U2 were chosen to perform on Mark Cuban’s TV show “The World’s Greatest Tribute Bands”, and are the only U2 tribute band to-date of the TV shows 5 seasons to be officially selected (see below for more info).

They were invited by NAMM 2018 to open the show with an impromptu surprise rooftop performance for attendees. As they performed “Where The Streets Have No Name” up on the Anaheim Convention Center Rooftop balcony, many thought it was U2 and this caused a big stir on Social Media.

Hollywood U2 is an entertainment favorite with clients such as, Microsoft, Google, Harley Davidson, California Wineries, Country Clubs, Visa, MGM, Caesar’s Palace to A-List Celebrities and many more.

As U2 fans, they take pride, care and detail in performing a U2 tribute show that pays tribute to the many great tours and music of U2. Performing the songs with heart, passion and accuracy. They perform U2 tribute shows from using just one look to multiple looks incorporating ZOO TV, Elevation, Vertigo, Joshua Tree 2017 to U2’s current look. As U2 continue to reinvent themselves Hollywood U2 take great joy in presenting a show that honors U2’s past as well as their present. Their goal is to bring the heart and message of U2’s music to lovers of great music everywhere. As Lead Singer Joe Hier points out in all of his live shows, “We’re very big U2 fans and the message we’re bringing to you is Love. The word love is in almost every U2 song. That’s really something. That’s the message”.

A little more about the band…

Bono himself invited the lead singer Joe Hier up on stage to sing “The Sweetest Thing” with him and U2. This took place at The Forum in Los Angeles on May 26th, 2015 and made International news and headlines and has been covered by Rolling Stone, LA Times, The Daily News, NY Times, Chicago Tribune, etc. In a KROQ radio interview a few days later, they spoke about it and Bono said, “He was the split of me and he sang beautifully”. The Edge said, “He knew the song better than we did”. The Wall Street Journal listed this performance as number 2 out of the “Top Ten Must See Performances” of U2’s Innocence and Experience Tour. This list included performances by Lady Gaga and Bruce Springsteen.

In 2012 Hollywood U2 got the call to perform on Mark Cuban’s AXS.TV show “The World’s Greatest Tribute Bands” (hosted by Katie Daryl) becoming the only U2 tribute band to-date of the TV shows 5 seasons to be officially selected to perform. They performed an extended 90min Live TV Broadcast on Season 1 (2013) and and made history on the TV show by being the first band invited back by popular demand to perform another extended 90min Live TV Broadcast for Season 5 (2015). Joe Hier returned a third time for another live performance and sang the Bono and Frank duet, “I’ve Got You Under My Skin” with Gary Anthony (Las Vegas Frank Sinatra Impersonator).

From the sunglasses and costumes to the compelling vocals of the world renowned Joe Hier (Hollywood Bono), Hollywood U2 are consummate musicians who bring the look and sound of U2 & true heart of U2 to every performance with the precision and excitement, of a U2 concert. This show is as close as you can get, aside from hiring the real U2. While they can bring any era of U2 to fans they specialize in bringing the iconic Zoo TV tour, Vertigo tour, Elevation tour, Joshua Tree 2017 30th Anniversary tour and up to the current Innocence and Experience tour to U2 fans with costume changes, props and video content. Their vast experience has taken them around the world, captivating crowds of 10,000 plus. They have countless glowing reviews from Major Corporations, Fans & Celebrities and are a must see for all U2 fans. They are available for corporate, public and private events, weddings, clubs, summer concerts, casinos, arenas, T.V. and film performances, etc. 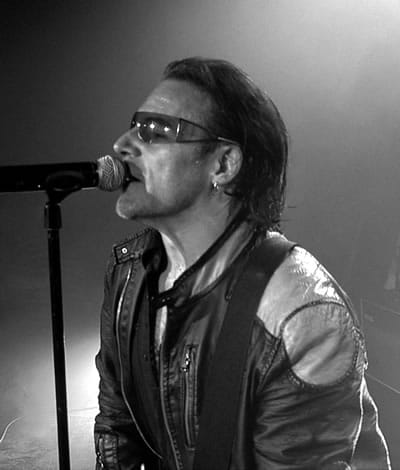 Joe Hier is a multi instrumentalist, and performed as a guitarist in various bands in Boston. He was adopted at birth and always wondered where his natural love of creating music came from. He remembers being a small child barely reaching up to a piano and pressing the keys. He had an instant love for this instrument and later found out that his biological grandfather and mother both played the piano.

Never initially intending to take the stage as a front man, Joe enjoyed playing guitar in various original bands in Boston with Jimmy Page and The Edge being his 2 all time favorite guitar players. He was invited up to sing a song on stage with friends in a cover band and being a big U2 fan he chose a U2 song. The audience was floored with his look and sound being naturally so close to Bono. After that, many times he was asked to start a U2 tribute band. However as a fan of U2’s music and with great admiration for Bono as a performer, Joe was very reluctant to. As he put it he didn’t want to be “One of those guys walking around like they’re Bono”. However, as some say “imitation is the highest form of flattery”, so with that in mind he started to think, “as a U2 fan what would I want to see and hear from a tribute act?” That’s when he started to put together his idea of a U2 tribute show that encompasses all that is great about U2 and he founded Hollywood U2 in 2003. Originally a carpenter by day and a musician by night, he was also writing and recording music for Film and Commercial spots. He eventually relocated to Los Angeles and started his U2 tribute band Hollywood U2.

Joe does not dress as Bono unless he is performing for a show or an event. It was his wife (who ironically has the same birthday as Bono’s wife) who encouraged him to dress as the Vertigo Bono for U2’s i.e. Tour. She said “It’s 10 years since the Vertigo Tour, I think Bono may get a kick out of seeing his younger self”. Sure enough Bono saw Joe and said “ I saw myself, Bono where are you?” He pulled Joe Hier up onto the stage to sing “The Sweetest Thing”. Joe said of this experience “I wasn’t up there as a Bono Impersonator, I was up there as a fan. At the time I had two tears in my rotator cuff and had been in extreme pain, which was tough and without monitoring I couldn’t hear a thing on stage. However it was a magical moment and I just remember feeling very humbled that Bono would trust me with his crowd and microphone. I appreciated the love and acceptance of the crowd that night as one fan to another. It was an amazing gift that Bono gave me and I continue to be inspired by him and U2. Thank you Bono!” This performance made headlines around the world from Rolling Stone Magazine to The Wall Street Journal, etc.

Joe continues to tour throughout the United States and the world with Hollywood U2 and astounds crowds with his live performance and unmatched look and persona of Bono. Joe prides himself on bringing U2 fans the multiple iconic looks and personas of Bono (most of the costuming is made by Joe and his wife) bringing fans all the U2 hits and more that span U2’s successful career.

When he is not performing with Hollywood U2, Joe works on a stop frame animation children’s show he created with his wife and writes music. 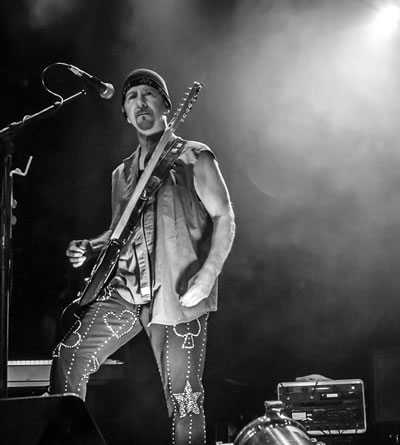 Is a Los Angeles-based Pop/Rock guitarist with a unique style and powerful sound.

Stevie also composes music for Film, Television, Advertising, and Interactive Media. His work has been featured on Fox, ABC, NBC, the Los Angeles Emmy Award Shows, and the Ani-FX Animation Festival, amongst many others. As a long-time lover of U2’s music – and a guitarist who has an insatiable appetite for experimentation with guitar tones and textures – Stevie has found Hollywood U2 to be the perfect place to apply his talents.

In his own words: “I have to say that I’m absolutely loving this band! I’m finding it to be a very rewarding and challenging experience each and every time I take the stage to perform these great songs and emulate the sound and look of one of my favorite guitarists.

After his family immigrated to Southern California, his Irish heritage remained strong as he grew up watching his musician father perform Irish music all across the southland.

Like his older brother before him, Roy began playing the drums at a very young age and would often play along to his collection of U2 tapes. Once he was old enough, Roy joined his father’s Irish band and his professional music career began.

Over the years, he has performed and recorded with a number of bands ranging from Irish to Alternative Rock, and everything in between. His playing style is almost identical to Larry Mullen Jr’s, which makes him a perfect fit for Hollywood U2.

In 2012, he had the opportunity to play a few shows with the band, and officially joined Hollywood U2 in early 2013. Since then, Roy has amassed a collection of drums and cymbals that are identical to those used by Larry Mullen Jr while touring with U2. 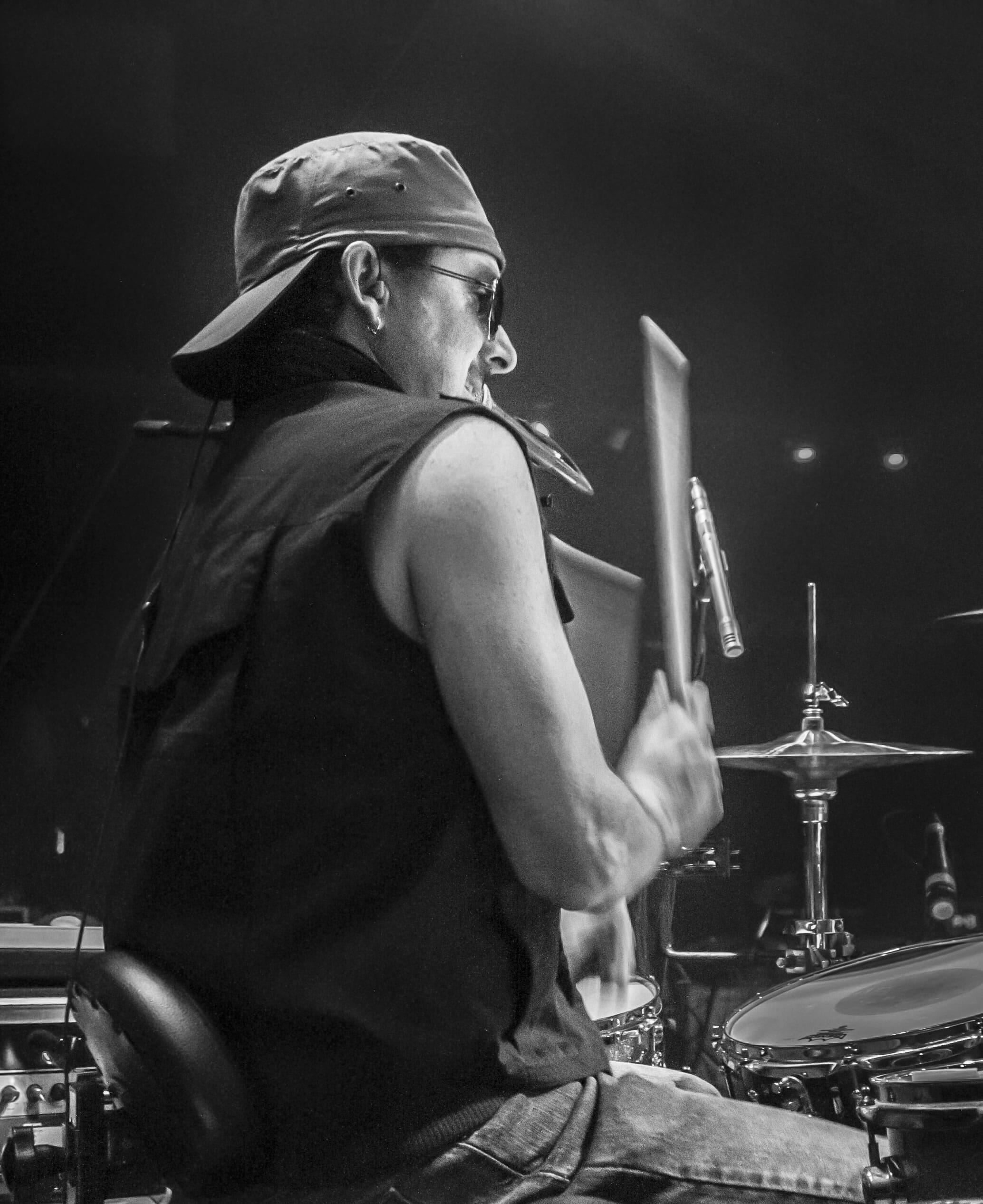 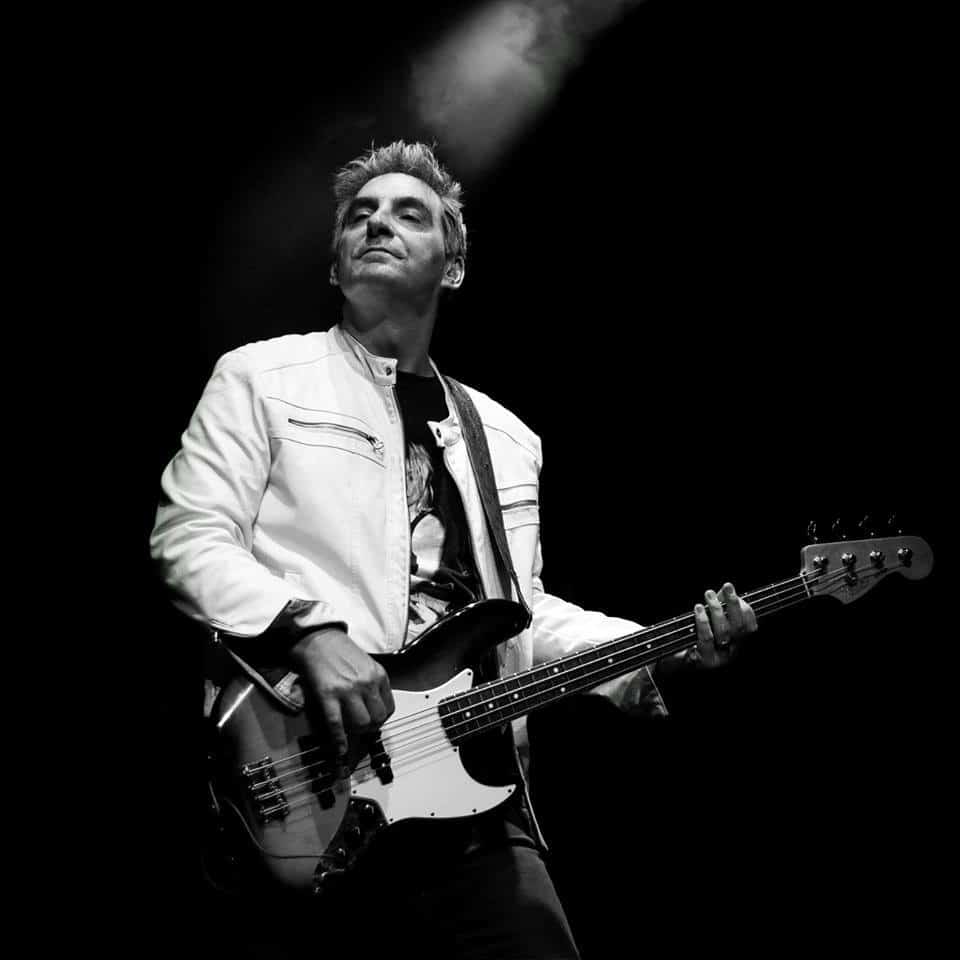 Michael hails from New York originally (moving to SoCal in 2004) and has been playing music since he was a young teen. He has led and performed with a variety of original rock groups and has played well-respected venues on both coasts and internationally. Playing bass is a passion for Michael but he is also a multi-instrumentalist who composes, records and produces on an on-going basis.

In 1985, already a big U2 fan, Michael caught U2’s ‘Live Aid’ performance as it was happening and was mesmerized. His favorite member of the band (then and now) was/is Adam Clayton. His unassuming swagger, performance style and unique musical sensibilities are just a few of the traits Michael brings to the role of emulating Adam.

Adam is known as the “Jazz Man” of U2 which is a great coincidence being that Michael works for one of the best non-profit Jazz radio stations in the country (Production Director for KSDS-FM). Michael counts Thelonious Monk, Art Blakey and Miles Davis among his Jazz favs. The Beatles, Led Zeppelin and of course, U2, contribute mightily to his musical Rock/Pop DNA.

Michael has been recreating the essence of Adam since 2014 and prides himself on being extremely detail-oriented in the performance and presentation of Mr. Clayton with every gig he plays.